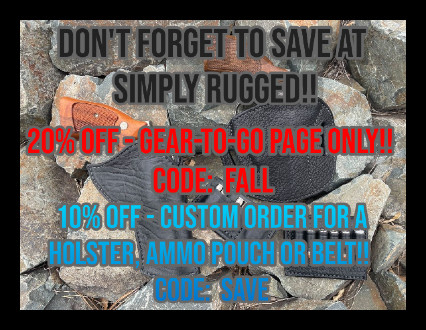 "In 1950, one of the most famous of the Smith & Wesson revolvers arrived. A five-shot, compact revolver to fire the more powerful .38 Special instead of the .38 S&W was introduced at the Conference of the International Association of Chief’s of Police in Colorado Springs, Colorado and has been officially and lovingly known as the Chief’s Special ever since. This was the first J-frame revolver and was larger than the I-frames and chambered in .22, .32 S&W Long, and .38 S&W. In 1960, all I-frames became J-frames."

Save 20% off our GEAR-TO-GO/CLEARANCE PAGE of our web site!! Enter the CODE: FALL on the check out page of your cart! Sale will continue until merchandise is gone!! Check back for new listings!!

We are offering a 10% discount when you order a holster, ammo pouch or a belt. Enter discount code: SAVE on the check out page of your cart to receive the discount.